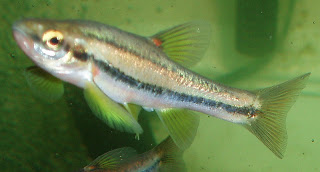 Mike Burgett and his mates in the Lettuceheads have risen to the challenge of scoring one of Stefene Russell's poems about extinct species, "Las Vegas Dace", for our open-ended Extinction of Species project.

I have implored Mike to take another crack at this poem, treating it as a lyric sheet rather than a poem, which is sort of like telling someone who has just given you a present that they should give you another present.

The image, by the way, is some other nameless, faceless dace from somebody named Robyn's dace page. For the life of me, I can't find an image of Las Vegas Dace online, whose extinction seems to be matched by internet invisibility.

It didn't glow in the dark
or eat silt, it was not pin-striped,
it didn't know any magic tricks
and its skin was the three colors of mud
and its fins were accordion fans;
its funeral music was nothing but
blood curling into the water.
A man with three cards up his sleeve
and a shiny green suit
kept a slack-jawed fish from Egypt
in a wide-mouthed glass bottle
and carried it with him as he traveled.
He thought about letting his fish go
on the strip, in the flowering spitfire waters
where the fiberglass pirate ship
rocks back and forth every hour,
shooting plaster cannonballs
suspended on wires,
then thought better of it.
Into the desert he drove,
with a malfunctioning gun
under the passenger seat
a burlap sack of kwik-crete
in the trunk, and his fish in a jar
dancing back and forth
as the car lurched.
Here's your new water, fish -
Goodbye and now for you
your own drunkenness and
all-night carousel, your
fish Paris and Rome and Memphis.
Go whirl around in the river, outlines of
Indian paintbrush wavering over you in the darkness,
and the lights of the city, far off,
promising you everything,
lights effervescing
like a pirate's flying saucer.

More on The Extinction of Species. Sign up to score a poem today!
Posted by Poetry Scores at 10:35 AM