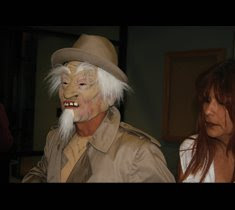 I'm continuing a new series of looks back on Heidi Dean's vocal work with Poetry Scores over the years, in recognition of (and to publicize) her blog debut, Married to the Masala.

I started off with "In the night when it's dark," an ancient Egyptian hymn to Hathor that I scored for an early version of the band Three Fried Men, with Heidi on vocals. That song isn't a poetry score proper, as defined ("a long poem scored as one scores a film"). It's a poem setting - a poem set to music - a subsidiary art of poetry scores.

So, here's another poetry setting I did with early Three Fried Men, "Ghosts drunk on horseback," as always featuring Heidi on vocals. I recall encouraging her to double my vocal lines or harmonize just as much as she wanted - anything to drench the songs with her crystalline, crisp, angelic, shadow-casting voice.

"Ghosts drunk on horseback" should actually be characterized as a prose setting, if I gave a hoot about the generic distinction between poetry and prose. Really, I don't, especially when it comes to my favorite materials to write songs with, which tend to be mythic and folkloric texts.

Most such traditional texts were originally spoken, chanted, or enacted in some ceremonial context, rather than written down. So how we format them on the page and what generic assumptions govern that formatting strike me as bibliographic concerns. Just tell me where to find this stuff on the bookshelf, so I can get it off the bookshelf and into a song.

The words I adapted for "Ghosts drunk on horseback" are to be found in a book shelved with prose or autobiography (or ethnology or American Indian studies), because they are excerpted from Autobiography of a Winnebago Indian (1920), gathered, cotranslated and edited by Paul Radin (still available in a cheap Dover Publications edition and a great read!).

A Winnebago man identified only as S.B. (Sam Blowsnake) wrote his life story using a written form of Winnebago they had adopted from neighboring tribes, who had adapted the syllabary after contact with those problematic European bookworms. With the help of another Winnebago man, Oliver Lamere, the maverick Polish-born ethnologist Paul Radin fleshed out the written Winnebago text in English and published it as a memoir.

The part I set to music appears in a small, bizarre chapter titled "I GET DELIRIUM TREMENS AND SEE STRANGE THINGS."

Blowsnake is remembering a time when he came back home after he had been out cranberry picking and working for the white man, making money and spending it on alcohol and women. Back home, without booze or money to buy any, he goes into withdrawal, which sends him a jarring vision:

In the morning I was sick. I was shaking (from head to foot). When I tried to drink coffee, I would spill it. When I lay down I would see big snakes. I would cry out and get up and then when I was about to go to sleep again, I would think that someone had called me. Then I could raise my cover and look around, but there would be nothing. When the wind blew hard (I seemed) to hear singing. These (imaginary people) would spit very loudly. I heard them and I could not sleep. Just as soon as I closed my eyes, I would begin to see things. I saw things that were happening in a distant country.

I saw ghosts on horseback drunk. Five or six of them were on one horse and they were singing. I recognized them, for they were people who had died long ago. I heard the words of their song, as they sang:

"I, even I, must die sometime, so of what value is anything, I think."

When you listen to the song, you hear that I adapted these words to make them fit a melody. I also added a verse:

By the way, students of American Indian traditions (as I was, on an amateur basis, when I wrote this song) and followers of a native faith (as I have since become) will recognize a bottomless depth in the imagery of Sam Blowsnake's vision.

Typically of native peoples, the Winnebago traditionally followed a faith based on ancestor veneration (sometimes called "ancestor worship," which gets the emphasis wrong). Essential to this spiritual practice is an ongoing relationship with the dead, through dream, ceremony - or vision, as Sam Blowsnake experiences here, albeit through the degraded visionary form of delirium tremens. Degraded, but powerful!

So, consider what happens. He sees in a vision the ghosts "of people who had died a long time ago." This is a conventional sacred experience for a devout native person, the sort of thing that perpetuates the tradition, like going to Mass for a Catholic or fervently praying on Scripture for
a charismatic Christian worshipper.

But the wisdom of the ancestor transmitted in the vision is, in essence, a vision of the end of the tradition: "I, even I, must die sometime, so of what value is anything, I think." This is a negation of a cardinal tenet of the faith. A spirit of the dead is saying: I die, so it doesn't matter what I have to tell you - when the visionary tradition of ancestor veneration depends upon the dead ancestor providing wisdom that helps to sustain the living and the tradition of the faith.

At this precise moment in this Winnebago man's autobiography, I saw one of the signs of the death of this faith. Imagine Jesus speaking to a Christian in deep prayer and saying: I died, forget me, it doesn't matter what I said, your Bible is just a book of things said by a man who died.

Of course, this is the vision of a drunk in withdrawal, which makes the moment even more profound, considering the role alcohol and alcoholism have played in the devastation of the Winnebago and other American Indian people.

There is an interesting sequel here. Let's go back to the vision/song and pay it forward one more thought.

I saw ghosts on horseback drunk. Five or six of them were on one horse and they were singing. I recognized them, for they were people who had died long ago. I
heard the words of their song, as they sang:

"I, even I, must die sometime, so of what value is anything, I think."

Thus they would sing and it made a good song. I myself learned it and later on it became a good drinking song and many people learned it. I liked it very much.

Think of that! A vision of the end of the sacred tradition, transmitted in song by a group of drunken ancestors, survives among the living - but as a drinking song! A song shared by the living while drinking "spirits" that are decimating the people!

At the very least, we can keep alive the drinking songs of the ghosts of the ancestors. Heidi Dean's voice happens to be perfect for this sort of thing.

More in this series

Heidi Dean #1: she is the one who sweetens evil

Picture of a contemporary Winnebago man in a Halloween ghost costume at the tribe's WinnaVegas casino from the tribal site.
Posted by Poetry Scores at 5:12 AM

That has always been my favorite line in the song too!
-Dave

Mine, too -- it has a Countryish rhythmic build-up that makes it satisfying to lean into as a singer. My other favorite phrase to sing was "I, even I, must die someday, so what is the value of what I think," for the truth in it, which made it posible for me to really let it fly.

The glorious return attempted covering
"ghosts"....we loved that song....many great lines..
at the same time we tried the russell hoke gem
"twisted mountain".........
we couldn't do either justice!

Interesting insights and information for me!