Heidi Dean #1: she is the one who sweetens evil 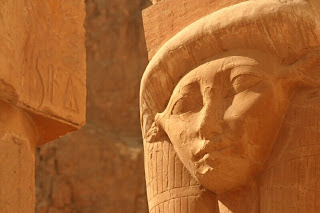 When Fred Friction released his solo debut, Jesus Drank Wine, I marked the occasion with a retrospective set of posts picking apart Fred's many and varied contributions to Poetry Scores over the years.

Now that Heidi Dean has debuted her blog debut, Married to the Masala, I thought I would give her the same deluxe treatment.

Certainly, no one deserves more praise or gratitude from me than Heidi does - she has been lending her gifted and trained voice to our projects (often, alongside my own awkward and untutored voice) for more than a decade now.

I'll start at the beginning, with the first Three Fried Men record, Dance for an Orphan's Wedding. Though a band record, rather than a poetry score per se, nearly all of the fifteen songs on the record incorporate texts drawn from earlier traditions.

One that particularly showcases Heidi is "In the night when it's dark." Adam Long's final mix begins with Heidi's rather wicked-sounding laugh in the vocal booth, as she was getting ready to record her backing vocal. That vocal is sublime, soaring above my mutter as we relay an ancient hymn to the Egyptian goddess Hathor.

I adapted the lyrics from Music and Musicians in Ancient Egypt, a now out-of-print book by a serious Egyptologist named Lise Manniche.

Three Fried Men was offered a national recording deal for this record (long story ...) that we turned down (partly on the advice of the wife of the label owner! long story ...). While we were considering taking the deal, I went about trying to get permissions to use all of the lyrics I had borrowed, chopped and screwed; somewhere around here I have a puzzled letter from Lise, who was living in northern Europe, saying, "Uh, sure. Have at it."
Free mp3

"In the night when it's dark"
(Chris King)
Three Fried Men
(Heidi Dean, vocals)
From Dance for an Orphan's Wedding
(out-of-print CD)

Some great musicianship on here, by the way: Dave Melson (bass), Jim McCarthy (pedal steel), Carl Pandolfi (piano), Billy Teague (drums). And then there is me on acoustic guitar and lead vocal, playing a tricky part I no longer remember.

I found the source lyrics (drawn from Lise's book) online in an interesting essay by David Whitwell.

Come, O Golden Goddess, the singers chant
for it is nourishment for the heart to dance the iba,
to shine over the feast at the hour of retiring
and to enjoy dance at night.

Come! The procession takes place at the site of drunkenness,
this area where one wanders in the marshes.
Its routine is set, the rules firm:
nothing is left to be desired.

The royal children satisfy you with what you love
and the officials give offerings to you.
The lector priest exalts you singing a hymn,
and the wise men read the rituals.

The priest honors you with his basket,
and the drummers take their tambourines.
Ladies rejoice in your honor with garlands
and girls with wreaths.

Drunkards play tambourines for you in the cool night,
and those they wake up bless you.
The bedouin dance for you in their garments,
and Asiatics with their sticks.

The griffins wrap their wings around you,
the hares stand on their hind legs for you.
The hippopotami adore with wide open mouths,
and their legs salute your face.

These words were written in hieroglyphics alongside a painting on an Graeco-Roman temple at Medamund, north of Thebes. Lise must have translated them into English, which would have been why I went to her for permissions. Being a rock & roll poetry scorer rather then a real scholar means a little leeway in remembering the footnotes.

If you scan these lines while listening to the song, you will see the many liberties I have taken, beginning with only using a few of the best lines and then rearranging them to make them more fun to sing. The opening bit, "you can scare birds with me," was pulled from somewhere else; I think that is the literal meaning of the phrase Egyptians used for "tambourine".

Image of Hathor from the Temple of Hatshepsut, Deir el-Bahri.
Posted by Poetry Scores at 4:20 AM