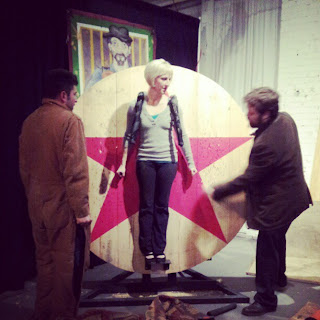 
"Here is a book which, if such things were possible, might restore our appetite for the fundamental realities." Thus Anais Nin prefaced Henry Miller's 1934 novel Tropic of Cancer.

Here is a show which, such things being possible, restores our appetite for the fundamental realities. I think that's safe to say of Tropic of Cancer, the interactive multimedia show that Van Ella Productions has created on commission from the Koken Art Factory for its Naughti Gras 6 festival. The show opened last night and closes tonight, or rather at 1:30 in the early morning tomorrow.

"So much more" includes the most jamming basement party I've ever been a part of. Curated by Michelle Mynx of Gravity Plays Favorites, her Pinks & Winks show reminded me of epic nights in Cicero's Basement of early St. Louis indie rock, but this was the woodshed and cutting floor of indie burlesque in St. Louis.

The Pinks & Winks set that started at 11 p.m. Friday night will be one to remember. It included Lola busting through three improv dances in a row, taking an onstage shower somewhere in between that left the stage in need of a burlesque Zamboni machine. But Katrina Dohl, the other half of Gravity Plays Favorites, stomped right through the onstage puddles in high heels that, even when wet, managed to glue her to the dance pole when Katie went vertical and horizontal at the same time, the way those Gravity's favorites do.

The interactive aspect is essential to their art. Lola does much more than produce shows. She is self-consciously a community creator. Van Ella Productions itself is now a teeming community that includes Lola, her parner in all matters Kyla Webb, Michelle, Katie, Foxy, Jeez Loueez, their house band The Royal We, and many more people. They all have been wearing their masks and costumes in public for so long now that they have at least temporarily become the mythy beings they've imagined for themselves.

The burlesque counter-culture in St. Louis is now deep and layered and in active fermentation with an almost countless number of other niche scenes: the tattoo heads and Zombie Squadsters and creative anachronisters and alternative theatricals and gay scenesters and roots rockers. But the public is allowed to pet them. And surprisingly to me, the wider St. Louis public that used to only know when the game was on is now waking up to local burlesque as a safely freaky way to spend a Friday night.

It helps, in this regard, to understand the safe limits of interactivity. The performers in Tropic of Cancer wait for you to come to them. The Mermaid lady lounges as only a Mermaid lady can -- approchable in her sly way, but not even able to approach you if she wanted to. (A burly roustabout waited on her hand and fin on Friday night, occasionally picking her up and lugging her to the lady's room.)

"He or she" is key. Nothing is expected of the audience, no one's personal boundaries are going to be tested any more than they wish, but the love and lust being performed by the showgirls (and, occasional, showboys) is free and open. The female form is being worshipped and investigated (or, much less often, the male form), but the gender of the worshipper appears to be interchangeable.