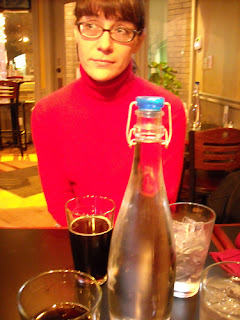 
A release party will be held 7 to 11 p.m. Friday, February 15, 2013, at Mad Art Gallery (2727 So. 12th Street) for Inferna, a new poetry chapbook by Stefene Russell, published by Intagliata Imprints. Inferna is a contemporary underworld journey in miniature, told through nine cycles of three poems each. The chapters are roughly equivalent to the circles of the underworld as described in Virgil, Dante, and the myth of the Babylonian goddess Inanna. But Inferna is not the underworld as Dante wrote it—a hell where sinners are tormented for eternity—but a subterranean ecosystem that is claustrophobic, hellishly self-referential, yet ultimately redemptive.


The event will feature readings by Chris King, Mali Newman, Chris Parr and Nicole Rainey, Stefene Russell, and Joseph Sulier. At the event, the St. Louis Curio Shoppe, which sells only work made locally or about St. Louis, will sell a variety of local books and art made by local women or about local women.

Chris King will read hellish man poems from his 2012 chapbook Shape of a Man (Intagliata Imprints). Chris is creative director of Poetry Scores, an international arts organization based in St. Louis that translates poetry into other media. He has a poem and several translations of Orhan Veli in the inaugural edition of So It Goes, the new literary journal published by the Kurt Vonnegut Memorial Library (November 2012).


Mali Newman is the pen name of St. Louis native Charlois Lumpkin, who has been writing prose and poetry since 1995. For over 15 years, she has been a member of the Eugene B. Redmond Writers Club, and has performed as a member of the club’s Soular Systems Ensemble at the Atlanta Black Arts Festival, at venues in Sacramento, San Francisco, and East Palo Alto, California, the Dunham Center at SIUE Edwardsville, and a celebration of 20 years of Drumvoices Revue at the Harlem Arts Salon in New York City. She is the 2010/2011 E. Desmond Lee Playwriting Competition winner in the Ten-Minute Play category, and her work has been featured in volumes of Drumvoices Revue, Breakword With The World, The East St. Louis Monitor, and the anthology The Hoot and Holler of the Owls, published by the Zora Neale Hurston/Richard Wright Foundation.


Chris Parr is a transplanted Kiwi now living in Saint Louis, and Professor of Religious Studies at Webster University. In cooperation with Tony Renner, he launched •chance operations• a monthly poetry reading series at Duff’s, in April 2010. He has presented his poetry at Laumeier Sculpture Park, the Royale, and at Poems, Prose and Pints ad Dressel’s pub. His work has been featured in Agni, Black Mountain II Review and Climate. He is the author of cars are part of nature too (Illeagle Press, Boston), and most recently, Going to find it... (St. Louis Projects, 2012).


Nicky Rainey makes ‘zines, writes grants, stories and letters to her pen-pals. She co-DJs on KDHX's literary radio program "Literature for the Halibut,' and represented St. Louis in the National Poetry Slam - 2009. For a copy of her latest zine, "Let's Talk About People," send her an email at n.k.rainey@gmail.com.


Stefene Russell is St. Louis Magazine’s Culture Editor, and is a member of Poetry Scores, who translated her poem Go South For Animal Index into music in 2007. The poem, with essays by Russell and Poetry Scores artistic director Chris King, was released as a letterpress book with a CD of the score, printed by Firecracker Press. Russell is also a former co-editor of 52nd City and Prinsesstarta literary magazines.


Joseph Sulier will be reading selections from his latest chapbook, The Ruins of a Rube as well as new works.

Posted by Poetry Scores at 8:56 PM