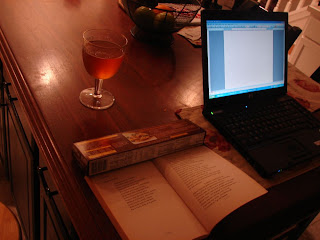 This, in all its glory, is how it all begins, often: one man, with one beer (at a time), typing up a long poem.

Poetry Scores pursues the mission of translating poetry into other media, and to translate the poetry we need to make it portable. We need to be able to get the poetry to musicians, visual artists and fellow travelers who want to follow our journey from poem to poetry score to Art Invitational to silent film.

We focus on long poems, which seldom are available online in their totality (and we score them in their totality, line by line sequentially, though backtracking to repeat lines as a hook is permitted).

I thought to add that we also focus on obscure poets, who are hard to track down, but that is not exactly true.

The poet we are scoring this year, David Clewell, was reasonably obscure when we got ahold of him long ago. Then the state's First Lady chairs a committee to pick a new Missouri Poet Laureate and reinvigorate the position - and dang if they don't pick Clewell.

It reminded me that the first poet we scored, Leo Connellan, was the Poet Laureate of Connecticut when we recorded him, in the basement of his publisher at the time, Curbstone Press. Curbstone was hubbed in Willimantic, Connecticut, and the publishers had done much to help Leo establish himself in his adopted state.

Adopted, for our Connecticut Poet Laureate was a son of Maine who talked like Elmer Fudd, just as our Missouri Poet Laureate is a New Jersey guy who sounds like the neighborhood mobster on his paper route as a kid.

And, get this: the poem I was getting ready to type up last night, when I took this picture, was written by the first Noble Laureate for Literature from the continent of Africa.

That box of wheat spaghetti is propping open the Early Poems collection by Wole Soyinka. The collection is propped open to the poem "Ever-ready bank accounts," from the Poems of bread and earth section of his scathing book of prison reflections, Shuttle in the Crypt.

I did manage to get it typed up last night, while drinking one beer several times in a row, and holding forth with the universe through all these constellated media. The poem is portable! The shuttle is ready to leave the crypt!
Posted by Poetry Scores at 9:56 AM