Death seemed a little much for Jack Ruby 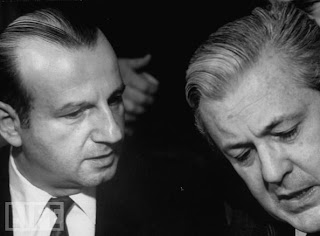 This year Poetry Scores is scoring Jack Ruby's America by David Clewell - that's Missouri Poet Laureate David Clewell, to you - and I have been enjoying doing a little side reading on the subject, just for fun.

This controversial trial in Dallas - which spanned from December 23, 1963 to March 14, 1964, from bail hearing to guilty verdict - rates all of eight lines in Clewell's poem:

My lawyer Belli tried to sell the jury I’m a victim
of psycho-something epilepsy – all you need to know is blackouts, Jack.

Hell, I wouldn’t buy that myself is Jesus Christ was giving it away
on the courthouse steps. It took the jury less than an hour
to figure of course I’m guilty, and what else could they say.
No one in that courtroom was expecting an order of death, but that’s
what the jury recommended. I could have gone for something lighter
that early in the morning. Death seemed a little much

Specifically, the jury convicted him of murder with malice, and it was the "with malice" that made him good for the death penalty.
"Psycho-something epilepsy" is "psychomotor epilepsy," which Belli tried to prove through expert medical witnesses who put at least two jurors to sleep. This expert testimony did so little to persuade the jurors that remained awake for it that, when deliberating, the jury voted not to read this testimony back to those who had slept through it.

Belli advanced this diagnosis as a species of mental illness. He used his medical experts to argue that the unstable and overtsimulated Ruby had a seizure in the basement of the Dallas Police Department and shot Lee Harvey Oswald dead in an unconscious fugue state.

The jury didn't buy it, Clewell didn't buy it - Clewell's Ruby doesn't even buy it - but there is some evidence to support it (in addition to the medical testimony). Two eyewitnesses saw Ruby convulsively squeezing the pistol after he had shot Oswald and been wrestled to the floor. And one of the first things Ruby said after the shooting was, "What did I do?"

Clewell's Ruby knows well what he did and why he did it. Clewell has Ruby working for organized crime in Dallas and taking orders to do a hit on Oswald, though the poet pedals lightly on the conspiratorial underpinning of his narrative poem. This is a story about an underdog, not a conspiracy.
Belli's memoir of the trial is mostly beside the point of Clewell's poem. It was written after he had lost the trial and been fired by Ruby, but before the guilty verdict and death sentence had been reversed on appeal. Though Ruby had different legal representation in the appellate process, his appeal followed the first line of argument that Belli had pursued - the Ruby could not receive a fair trial in Dallas and merited a change of venue.

In fact, the appellate court ruled that Belli's first motion for change of venue should have been granted, so in a sense it was Belli who won the day for Ruby.
Ruby died of cancer before he could be retried. The cancer had an abrupt onset and rapid - some would say suspiciciously rapid - progress. Ruby thought he had been deliverately injected with the cancer at Parkland Hospital (where President Kennedy and Oswald had died).

For some, this is further evidence of conspiracy - dead men tell no tales, and Ruby was headed for a new trial trial out of town, when he had said he could not talk freely in Dallas. Belli, on the other hand, saw this paranoid claim as further evidence of the mental illness his expert doctors had diagnosed in Ruby and that should have absolved him of the crime.
Crazy or not, murdered or not, Ruby died an innocent man, his guilty verdict overturned. As the poet says:

I came out of fucking nowhere,
and I’ve been working my way back ever since. But there’s no way
I’m about to die even close to guilty in the eyes of the law.
I’ve been reversed for two months now, and it’s as if what happened
never happened – my part, at least. I’m almost beside the point.
I said it before: I’m history.

*
Trial photo of Ruby and Belli from LIFE magazine.
Posted by Poetry Scores at 3:11 AM