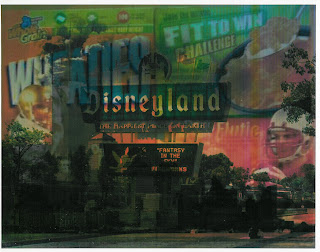 Those who have worked with me on a musical score to a poem know I am a great believer in the mockup - the assembly of an skeleton of the score with all of the song sketches and fragments sequenced in order, to get a feel for how the whole thing is coming together.

I suppose this is a mockup of the 2008 Poetry Scores Art Invitational to Nailed Seraphim by K. Curtis Lyle, which will be held 6-10 p.m. Friday, Nov. 21 at Hoffman LaChance Contemporary, 3100 Sutton Blvd. in Maplewood.

The work will be available on silent auction, and Curtis will perform the poem as well, backed by Baba Mike Nelson, David A.N. Jackson and Christopher Y. Voelker. The event is free, and the Schlafly beer will be free. If you want to bid on the art, bring your cash, check or credit, since we will close all sales Friday night.

Here, in order, are the pieces that we know we are getting in for the show, with opening bids when we have them (artists, we need them!):
*
Nailed
Gene Harris
(Exhibit only)

Home is the hero
Home is the man who looked upon death
The demonic, the unspeakable horror
Of the reversed god joke
Michael Hoffman
(Opening bid: $100)

Here is the carrier of the new word
Raised magnificently
Against those who would enter the exalted crucible
In shroud
Jon Cournoyer
(Opening bid: $100)

Che Guevara during his stint as head of Cuba's National Bank
Chris King
(Opening bid: $5)
Is this the hero whose photo-shopped picture you want on the front of a Wheaties Box. Is the dawg you want to send to Disneyland?
Keith Buchholz
(Opening bid: $75)

He penetrated some kind of center
Or spiritual vortex
He dialed up some impeccable code
Some blacked out strategic safety valve
That allowed him to evolve, for a moment,
Down some mythic magnetic corridor
Some rear window in a parallel universe
That occupied the same space and time
As the transcendent crime taking place
Kayren Lyle
(Opening bid: $999.99)

He dialed up some impeccable code
Daniel Shown
(Opening bid: $20)

That allowed him to evolve, for a moment
Alicia LaChance
(Opening bid: $75)

On the tree of life, the Christ-like exalted flowers and leaves
Carmelita Nunez
(Opening bid: $75)

He was an accountant not a warrior
They ruined his reputation and that was all he had
Andrew Torch
(Opening bid: $60)

The House of God Is Also A Black Hole
Lyndsey Scott
(Opening bid: $77)

These are the artists whose work we are expecting, but whose titles, etc., we don't yet have (and we need them!):
Alicia LaChance
William LaChance
Dianna Lucas
Adelia Parker
*

For more information, contact Chris King at brodog@hotmail.com and/or Robert Goetz at r_goetz@hotmail.com.

The image is of Keith Buchholz's piece - I previously had posted about it without having the image itself.
Posted by Poetry Scores at 4:16 AM