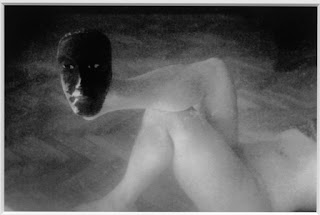 Poetry Scores is excited to announce its Fall 2012 project: Phantom of the Dreams' Origin by Andreas Embirikos, translated from the Greek by Nikos Stabakis.

Poetry Scores will host an Art Invitational to Phantom of the Dreams' Origin on Friday, November 9 at Mad Art Gallery in St. Louis. We will ask 50-plus artists from New York, Hawaii, Istanbul and a few other places to make art in response to Embirikos' great prose poem, considered the first manifestation of Surrealism in Greece.

Andrew Torch of the St. Louis Surrealist Group is guest co-curator for the Embirikos Art Invitational.

We worked out this project in collaboration with the American composer Barbara Harbach, who has our commission to compose the poetry score to Phantom of the Dreams' Origin in Stabakis' translation. The premirere of that score is scheduled for Friday, January 11, 2013 at the Touhill Center for the Performing Arts.

Here is the text to which our artists will respond and Barbara will compose. Given the Surrealist spirit of the original, we expect to try all sorts of other translations of this poem, into all manner of other media. Stay tuned!

Her sand is incredible. Her face joyous and each leaf on her boulevard at a standstill. Beyond the grease of the cup-bearing coach her sky became as a tingling knot’s eye and without effort or bridle the kneader of remote murders returns among us. The garden bears her trail toward the west palm of the swollen road and the little wick cries in her ever-shining bending over ices of withering vain ices related to the sly catapult’s unrighteous shrinking. No procession and the forgetfulness lamenting the sea-frayed combs endures like an intrigue inside the husk of the breast’s systemic narration.

Like the waters of a sworn jury her eyes’ calmness was troubled yet her recovered sight finally prevailed and flew to the clear sky of her domed dream as does a fly from a sleeping child’s nose to the tumult of brilliant silence. Then the law-observers’ assembly decided to kill silence once and for all and erect on that very point the statue of her eyes’ calmness for the young woman was holding her recovered sight inside her hands like a miraculous snake.

The Wires of Emotions

Attacking with the violence of fever he overthrew the tyranny of precipitous rocks. The clamor of the populace in ruins was hung on the wires and the ruptured brains gazed in ecstasy at the murder slipping toward the ulcer of the abyss. The lamentation of young trees was transformed into a laudation of great dimensions, and the flying animalcules bade farewell to the false panacea once offered to them at five p.m. and after bidding farewell to each other began to sing against seats and shields with admirable accuracy. The nature lovers voted for the abolition of subservience and the spurt of every last one became the pilgrimage of lepers and healthier units alike. At the top of the most illustrious hill an ammoniac catamount asylum was established in whose refreshment room the entrance of all seasons was permitted as was the cohabitation of young ladies with the dancing seafarers of the current year.

The solution of the manic affliction contains the fatigue of the icy well’s billowing. The entire dilation of the erect camels’ restoration on the fire-species that we all favor consents as reduction of spring’s briefest semaphores. Here passing bugle-calls of roaring vultures there marks on cheeks of half-bared women expecting us in the place of widowed serpents’ buzz. Beneath the branches of ocean steamers next to us the herbivorous horsemen will be named acrobats and like a practical saracen’s leaning his crystals will flow with the pear-skins preferring a penis’ erection to clouds of dead-calm in lateral roads of chemical refutation and recovery of excrement and jewels.

Women’s original form was the interweaving of two dinosaurs’ necks. Times have changed since and so has female shape. She became smaller more fluid better harmonized to the two-masted (three-masted in certain countries) ships sailing over the life-struggle’s disasters. She herself sails on the scales of a cylinder-carrying pigeon of long calibre. Seasons change and the woman of our times resembles a wick’s chasm.

She was deprived of her toys and her lover. So she bent her head and almost died. But her thirteen fortunes like her fourteen years sabred the elusive disaster. No one spoke. No one ran to protect her against the overseas sharks that had already cast the evil eye upon her as a fly casts upon it a diamond an enchanted land. So this story was mercilessly forgotten as is the case whenever the forester forgets his thunderbolt in the woods.

A most thunderous storm covered the country. Howling rocks assaulted the broad-brimmed lakes and the injured fish crawled to the anchorites’ station. No aid was supplied there for the bellowing of the megalosauruses scattered its fluttering on both sides and mushrooms kept silence over the actual facts in the hovering nuptial procession of a young planet's sighs. Afterwards nothing meant the same as before. Tranquility did not exist as a real entity. Disaster was curbed by camels. The temples of the dead were blooming. The few doves were laboring because the lake’s pulp had formed a canal at the narrowest point of their passage through thousand-mouthed insults trampled with the frenzied noise of mothers and young children thinner than a bat’s bones.

Decimal Bottles of Some Lean Lever

The day was like a most slender boat and many believed that it bore on its shoulder the homecoming day. The first in line troubled the psalm’s commencement and the glass table streams westwards ever since. Terrible are the momentary facts and our desire goes beyond the hourglasses. Terrible are the maidens’ eyes when tossed in the midst of love in the midst of a font in the midst or indirect midst of vultures. Yet there remain in resurrectional fish the lilies of buy-and-sellers the swords of marble coups d’etat and finally the awe of the fields’ werewolf. The record collection know no satiety. The epic is of no use to cavities neither for nor against the sexton’s vibration when cutting off the acrostic of the holy goat’s right thigh. That maybe is why his eyes were turning mercilessly green. That maybe is why to us the lesson was named shrimp.

The most incomprehensible whirl attained by a clavichord carried away the mole held by the young nurse’s regular nose. Before the great martyr the nurse’s hand dissolved and the right eye of a serpent in black collapsed with a terrible clatter. Yet the smoke was not carried away. Each of its flakes became a finch and insisted with dangerous fanaticism on envisaging the almond tree of a virtuoso orchestra’s hiding place. The beast-tamer was vanquished and for the one thousandth time shone the bow tie that induced many bathing women to the coffeehouse of the sixty-eighth zebra’s village. No one was more soiled than a burst watermelon. The ancient dotard’s impotence was abolished and on its place a reveling fog arose once and for all.

The Magnates’ Crossing is Completed

Poverty goes ashore the flower-glass today and her borders touch the small toothed screws following us. Our few hazelnuts shine in her hands and on her perfectly round breast wander the flocks that we do not yet own. Nevertheless the pen fell vertically and slowly but with no pretenses the rolls of our own findings started dripping. Our joy shall bring about disaster unless we submit fundamentally to their will. Brilliant and sensitive as a fruit shop it announces our poverty’s end on condition of the taps’ removal and of a silk lamp-bracket’s promotion amidst marine sorrows. Larks on pheasants fishes on mere fabrics and rhombuses on a locomotive accompany the precious screws’ arrival and the polyhedral bell rings the retreat before us in order to retain all continuity and all stitches of our flowers’ shudder and the emission of metal plates already thickening on breasts and inside of our clots’ pockets.

We are all within our future. When singing before the painters’ expressive pictures when learning before a burnt town’s straws when appropriating the drizzle of shudders we are all within our future for whatever we pursue it is impossible to say yes or no without the future of our destination just as a woman can do nothing without the conflagration enclosed within the ashes of her legs. Whoever saw her did not stand and stare at the rotating gardens nor at the revelry of worshiped hair nor even at the fifes of laboratory transfusions from one country to veins of a warm bay protected from this world and from the north winds of the slender virgins’ azure reflection. We are all within the future of a composite flag bearing before my heart’s walls the enemy fleets safeguarding delusions certifying intermediate supplication reformations without the object of struggle being understood. Certain snapshots suggested to us the correctness of our procedure toward the trainer of the same phantom of the dreams’ origin and of each resident of an ancient town’s heart. Upon the exhaustion of our chronicles we shall seem more naked than the arrival of the conviction of certain tentacles and clean winches for we are all within the silence of collapsing pain inside the sparkling tricks of our future.

Phantom of the Dreams' Origin is excerpted from Blast Furnace (1935). The text is from Surrealism in Greece by Nikos Stabakis (University of Texas Press), reprinted with permission of Stabakis.

The image is an untitled photograph by Embirikos, borrowed from the Thessaloniki Biennale of Modern Art.

Posted by Poetry Scores at 8:57 PM