"Not just a lament, but a dissent": Stephen Burt on "Incantata" 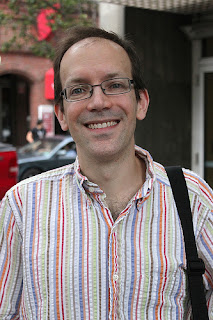 I asked Paul Muldoon who he thought should write the liner notes for our score to his poem Incantata, and he suggested Stephen Burt of Harvard University. Steve -- a literary critic of the highest order -- was very kind to consent. With his permission, we post his essay in advance of the premiere of Barbara Harbach's commissioned score of the poem (3 p.m. Sunday, October 30 at the Lee Theatre in the Touhill Center for the Performing Arts on the campus of UMSL).

During the early 1980s Paul Muldoon kept up a tumultuous romance with the Irish artist Mary Farl Powers, known for her colorful and disturbing prints of curvy, biomorphic forms. Powers died in 1992 from cancer she refused to treat by conventional means. “Incantata” (1994) is his memorial to her; it is also his longest non-narrative poem. Acclaimed as raw, intimate, vulnerable, compared to his cannier, more guarded norm, “Incantata” nonetheless harbors the intricate patterns and puzzles his readers expect: those patterns make the poem not just a lament, but a dissent from Powers’ own fatalism, and from any larger moral claims about patterns that we might find in the world.

For all its complex details and allusions, the poem breaks neatly in two: the first 23 stanzas, each a complete sentence, follow anecdotes and memories from the years of their romance through to the months of her illness – almost, but not quite, a life story. The last 20 stanzas, though each one concludes with a period, belong grammatically to a single, overextended sentence beginning “That’s all.” The long catalog of things lost, of lines starting with “of,” modulates into the doubly negated comparisons (“from which we can no more deviate // than that … than that … than that”) among which the poem ends. The two parts suggest a division between life, with all its variety, and death, which unites everybody and everything. Where Powers insisted, with Beckett, on fatality, Muldoon insists as well on randomness, on the unpredictability that remains for us, in this world, as long as we live.

Muldoon’s rhymes are typically unpredictable: in the first stanza, “barrow” (a trench or grave, not a wheelbarrow) rhymes with “Herrera,” “Inca” with “pink,” and “nautilus” with the Irish hero-god Lugh. Muldoon takes his stanza (rhymed aabbcddc) from W. B. Yeats, who used it for his gravely ambivalent elegy “In Memory of Major Robert Gregory” and again in “A Prayer for My Daughter." (The Irish a leanbh means literally “my child.”) Yeats’s poem “All Things Can Tempt Me” pursues his dual compulsion to keep writing, and to cease “this accustomed toil,” “this craft of verse”: when young, as Muldoon and Powers were once young, the poet sought vivid inspiration, but “would be now, could I but have my wish, / Colder and deafer and dumber than a fish.”

This first in a bevy of quotations and allusions set Powers up in a national tradition, one that becomes international fast. Yeats gives place to Beckett, the expatriate who settled in France, whose art of repetition and reduction can seem both fatalist and materialist, reminding us that all atoms reach the same end. In such a cosmos geantrai and suantrai, “love songs” and “lullabies,” are similarly temporary consolations. “In everything there is an order,” but that order has little to recommend it: sexual adventure ends in a ditch, all life in one or another barrow, and Christian resurrection is at best as remote as the metamorphoses of insects. The Book of Kells and the “High Cross at Carndonagh,” representatives of old Irish piety, are at best overfamiliar, at worst tourist kitsch.

On the other hand, they have survived. Powers and her mother, working together on one of her last lithographs, enact at once the secular promise that art can survive, and the also secular promise of generational succession. Powers, however, died childless, so that she can survive only in memories or in her art, an art full of worms, of travesties (like Beckett’s immobilized characters) of the human speaking form. Perhaps all art is “a potato-mouth in a potato-face,” a vegetable form that says nothing of its own.

The talking potatoes, the marauding worms, the other reminders of violence and decay, from the Irish troubles to the “submerged” towns destroyed by the Quabbin reservoir, anticipate the claim that seems to govern the second half of the poem, the claim that death makes everybody alike, turns all nouns and all names to “quaquaqua” or “quoiquoiquoi,” “what what what” (with an overtone of “why why why?”). It is a claim that the fatalistic Powers, in her illness, appeared to accept (though she pursued her herbal remedies), and a claim that the energies of Muldoon’s cascading phrases defy. His first defiance falls flat: “art… builds from pain, from misery … a monument to the human heart / that shines like a golden dome.” Such architectural, impersonal survivals, associated with public works and with institutional religion (the Golden Dome of Constantinople, or Istanbul) seem brassy, insincere, impersonal, closer to late-1930s Auden than to the oddities that we expect from Muldoon.

And so the poem grows odd again. Muldoon restates Powers’s own materialism (“nothing over / and above the sky itself, nothing but cloud-cover”), which he shares, and her fatalism (“nothing’s arbitrary”), which he does not share. He feints towards it nonetheless as he introduces his chain of repetitions, his epochal final sentence: “That’s all that’s left….” He will not come to a grammatical closure for 160 more lines.

The story of a life, which must come to an end, has turned into a list, which need not end at any particular point. This list sorts memories, and it seeks variety, in its use of the bodily senses (andouille, “the Cathedral at Rouen,” Calvados, Vivaldi) and also a variety of emotion, from “self-reproach” to sexual satiety. Its exuberance, “all composed of odds and ends,” seeks a centrifugal force, an unpredictable variety, to set against the centripetal pull of the syntax, and of the central fact, Powers’ death. “That daft urge to make amends / when it’s far too late” joins the catalog too, foreshadowing the final, more emotionally various, stanzas in which Powers’ father (the fiction writer J. F. Powers) visits her “sickroom,” where “of … of … of” gives way to “no more than ... than … than that,” where properties from the opening lines return.

Muldoon takes this chance to dissent again from Powers’ fatalistic cosmology, this time without making grandiose claims for art: “that’s all that’s left ... of the furrows from which we can no more deviate … than that we must live in a vale / of tears,” “than what we have is a done deal.” We all die – no divine “herbarium” can help that – but we are not destined to die at such and such time, nor in such and such way. Political violence, cancer and even floods (like the one that created the Quabbin) may all arise from some mix of natural law, blind chance and human endeavor, the same combination that generates the tangled wonders in the Book of Kells, in Powers’ potato-prints and lithographs, in Muldoon’s poem.

The bravura ending encompasses chiasmus after chiasmus: the cddc rhyme, the anagrammatic “row / of … worms,” the “ink-stained hands … hands stained with ink,” and the pairs of hands (Muldoon’s, Powers’, Powers’, Wahl’s) that span almost the entire poem, though now these hands can join “no more.” (The Irish language in the final line repeats, in Irish, the beautiful names of the ineffectual herbs.) The last stanza uses the same rhyming sounds as the first, reversed: aabbcddc becomes ddccbaab, “barrow” and “Herrera” (the initial a rhymes) mapped onto “row” and “arrah.” The same transformation occurs throughout the poem: the second-to-last stanza reuses rhymes from the second (“arm” and “worms” corresponding to “Hermes” and “herbarium") and so on; the middle stanza, to which the whole pattern must point, includes the Beckettian meaninglessness of "acacacac." (Several critics, such as Iain Twiddy, examine this pattern at length.)

If there is a hidden pattern built into our lives, it must be a pattern as absurd, playful, apparently arbitrary, and hard to detect as this skein of off-rhymes: a pattern that tells us only about itself. Muldoon remains sad, and he still wants to hold her hand: his poem has not brought in the doctrinal, nor the emotional, consolation of older and more famous elegies. Instead, that last line, with its heartbreaking counterfactual, tells us what Muldoon’s poem has accomplished. Into the welter, the quiddities, of all these memories, the poet has brought an appreciation, an ironic ornament, a colorful resistance to the monochrome of fate, an order not found in nature, but made by hands.