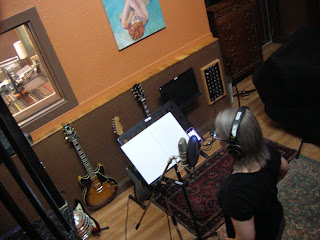 This weekend I drove Heidi Dean down to Nashville to overdub her vocals onto a handful of songs destined for our poetry score to The Sydney Highrise Variations by Les Murray. 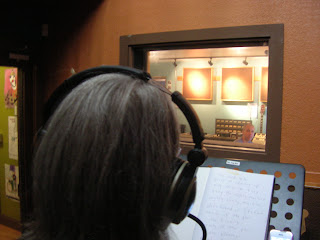 Click to enlarge this, and you will see what Heidi mostly saw: Lij inside the control room, talking to her about the quality of her take or the balance of her headphone mix. 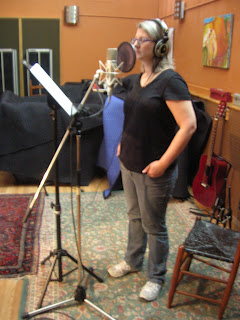 Heidi and I have been working on music together for many, many years, and her name often comes up when my coproducers Matt Fuller, Lij and I are trying to figure out how to round out the sound of a song. 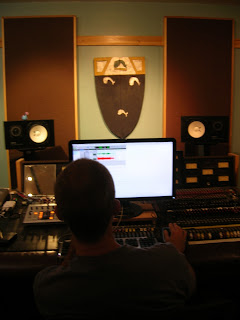 Lij, Matt and I have been making music together since 1989. Fortunately for Matt and me, we partnered up when young with a number of musicians (Lij, Meghan Gohil, Adam Long) who would go on to own and operate studios where we would be welcome to work, often for free. 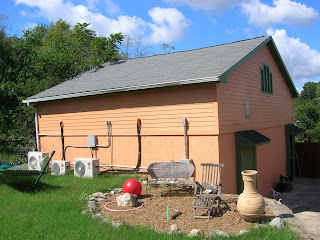 Lij's studio, The Toy Box, is built from his design in a shed on the back of his property in East Nashville, Tennessee, which was expanded for the purpose. The Toy Box is open for business and highly recommended.

These are all hastily crafted rough mixes. Most songs still need electric guitar parts, including solos, and other color instruments, such as keyboard, piano or percussion.

Our poetry score to The Sydney Highrise Variations will be released at an Art Invitational devoted to the poem that is scheduled for Friday, Nov. 13 at The Luminary Center for the Arts.
Posted by Poetry Scores at 5:34 AM