Letter from Les Murray, or Jabba the Hutt 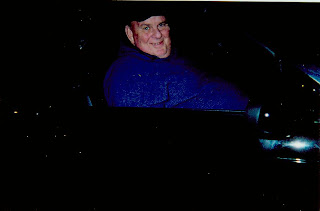 The great Australian poet Les Murray (subject of our 2009 poetry score) sent me this letter some years ago, apparently in response to a package I had sent him that included baby photos of my daughter Leyla Fern King (born April 8, 2003) and a long essay I wrote about sweating out her birth. The illustration here is the photo he is referring to in his self-deprecating "Jabba the Hutt" wisecrack.
Quadrant mentioned here is an Australian magazine which Les serves as literary editor. He has published a few of my essays and cotranslations in it, though in this letter he seems to be passing on whatever I had sent him for consideration. The magazine was originally started as a CIA front, which explains his Cold War reference, and remains conservative politically. Les has been painted as a conservative by radical Australian academics, but as this letter shows he actually has a disdain for politics - including leftist politics, which is what landed him in the radical academic crosshairs.

The day of recording he mentions was when we recorded his reading of The Sydney Highrise Variations for the 2009 poetry score, along with his "mouth music" for the score, which will have to be heard to be believed.
Like most of Les' letters, this was very generously accompanied by the signed typescript of one of his recent poems. I have several of these documents in The Skuntry Museum Library; they are of inestimable value to me and probably of real value on the archive market, if I were the sort of cad who sells things given to me by my famous friends.
*
Letter from Les Murray
Congratulations to Karley, to Leyla and to you. Well done, well born, and all hale and handsome after! I like the name "Leyla" very much. I know it means "night" in Arabic, and it was the name of a cousin I grew up with in amity and good cheer.
Thanks indeed for the photos. The ones that don't show the splendid ladies of the house are good too, in reminding me of a delightfully crazy day. Fancy conveying Jabba the Hutt in your car.
After seeing you & yours, I went down to Florida where I became the centre of a saga: I got mislaid in Jacksonville. I'd told the U. of Fla. that I was coming in to that city by United at 7 p.m., but when I arrived no one was there to meet me. This went on & on being true.
I finally decided to phone the university. As I went to read off the number on my one live credit card, it fell down between the phone & the wall of the booth, apparently beyond retrieval. I then raised Cain & Donald Duck till the airport maintenance men came & fished it out with tools, whereupon I went off to the Ramada, resolving to phone my hosts in Gainesville the next morning.
I'd just got into my first deep sleep when the phone rang in my room. Impossible! But it was indeed for me. Three girl students had searched Jacksonville's motels in the hope they'd find me, and lo. Two hours later & they put me back to bed in a grander place in Gainesville, so that the next night but one I could and did read to 300 students & others who wore shorts in honour of my "Dream of Wearing Shorts Forever" poem. They live that dream. But in the meantime the laconic director of creative writing told me of his relief at not having to retire in the odium of The Man Who Lost Les Murray.
I liked Florida, it's old villages under big shady live oaks, its Confederate graveyards and truck-tyre alligators, and all the four billions of water bubbling & squeezing up in its ponds.
After Gainesville I went across to London. One gig I was proud of was in the Oxford Union, the debating centre where politicians of the future learn their debating tricks: I drew a capacity crowd at noon on Boat Race Day, the deeply social event where Oxford & Cambridge universities race long narrow 8-man boats against each other with real rivalry & effort. Having got my capacity crowd in competition with that, I consider I won this year's race & am the Head of the Rivers, worthy of my tea and cucumber sandwiches anywhere in the kingdom.
Thence to Leipzig in the former East Germany, to schmoose with Fredy's German translator, a very painstaking fellow but drily cheerful with it. He and his lady showed me their handsome town, with J.S. Bach thundering away on the organ in St. Thomas' Lutheran Church and the former secret police still labouring away in their ugly mustard-yellow building but without police power now, or respect. They still do social case-work, but for insurance purposes, since neither state nor public wanted to feed them in jail. My first clerical jobs had that strong whiff of penal servitude in thir drudgery.
Thomas has been doing a fine job on Fredy, but insisted that I check every point & line, to eliminate any misconstructions. The book's to come out in German next March, at Leipzig Book Fair. The Italians are getting it out in November this year -- without having consulted me on anything. Fine, by me, so long as they've got their facts right. Thoroughness versus the virtue of sprezzatura that Italians pride themselves on. Dash, flair, the Ferrari touch ...
Quadrant? Well, here's a sample copy [now in The Skuntry Museum's Les Murray Papers]. My dream is of being ed. of a purely literary mag., with no blasted politics. No businessman of even slightly hard head would look at such a thing, or anyway none has, so I'm stuck with this ex-Cold War journal on bad paper. At least I can keep the Derrida-Foucault jargoneering out of it, and the ed. gives me carte blanche with my end of it, which is the rear end! plus the windows of verse that light the gloomy corridors.
I wish someone would print your piece on our recording day in NYC: it's a hoot! I can't, because I have a rule against publishing reviews of or pieces on me. I'm much tempted by your 3- or 4-level piece on - what? - thinking of other things wile sweating out a first birth. It leaves utterly in the shade my reading of Rayne Kruger's history of the Boer War during the birth of our Clare.
Love to you & Karley & Leyla. Oh, and how am I batting just now? Cheers - Les
*
THE HOUSE LEFT IN ENGLISH
By Les Murray

The house has stopped its desperate traveling.
It won't fly to New Orleans, or to Hungary again,
though it counts, and swears, in Magyar.
It is left in English with its life suspended,
meals in the freezer, clothes on airy shelves,
ski badges prickling a wall chart of the Alps.
The house plays radio, its lights clock on and off
but it won't answer the phone, even in Swiss German.
Since the second recession of helped steps
the house quotes from its life and can't explain:
dress-cutter's chalk. Melbourne Cup day 1950.
skullcaps. Wartime soy flour, with an onion!
All earlier houses and times, in black and white,
are boxed by aged children visiting to dust this one
on its leafy corner and still, for a while, in colour.
Posted by Poetry Scores at 8:40 AM

listening to half-an-ear to "to the best of our knowledge" on kwmu this morning and heard a guy read a poem and talk about religion and thought, "hey, this sounds like something chris king would be interested in."

of course, the poet was les murray....

Plato argued that poets would be banished from the ideal republic. He said poets are only good for promoting petty emotions, such as anger and lust and love. In this hour of To the Best of Our Knowledge, poetry. We'll talk with four-time Slam Poet champion Patricia Smith about how powerful words are when spoken out loud. And, a man many regard as the greatest writer in the English language, Australian poet Les Murray.

Patricia Smith is an African American who's the four-time champion of the National Poetry Slam. Her book "Blood Dazzler" was nominated for the 2008 National Book Award. She talks about her work with Steve Paulson and performs several poems.

Smith uses provocative language and imagery and often writes poetry from the point of view of another persona. In this piece, her use of profanity has been electronically covered, but there are still instances of potentially sensitive language - generally racial slurs.

Jay Parini teaches poetry at Middlebury College, and is the author of "Why Poetry Matters." He talks with Jim Fleming about the power of poetry and how it especially empowers young people in troubled times. Also, Gioia Timpanelli uses her poetic sensibility to write prose novels. She talks with Anne Strainchamps about the two kinds of writing, and her story "What Makes a Child Lucky." And we hear selections from the story.

Australian Les Murray is considered by many literary critics to be the greatest living poet in English today. He rarely gives interviews, but spoke with Steve Paulson and read several of his poems. His latest book of poetry is called "The Bi-Plane Houses.