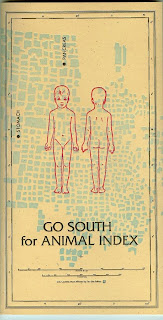 This poem by Stefene Russell was scored by Poetry Scores (producers: Matt Fuller and Chris King) and released on CD in 2007, in a limited edition that included an essay about the poem by the poet and an essay about the score by one of the producers. The image is from the cover art, designed by Eric Woods of The Firecracker Press. (Though nearly out of print, the CD and accompanying pamphlet may still be available in independent book and record stores in St. Louis.)
The bracketed numbers refer to footnotes at the bottom of the poem, prepared by the poet for the limited edition.

And desire is in the midst of the beautiful, appetizing trees. [3]

There is a mountain, shaped like an Indian.
One day, they say, he'll wake, and conquer Leetso [4],
The yellow monster, who was supposed to keep
America floating here above the sea.
Monsters are supposed to live under the magma,
But we took it home to live with us.

Our hero will drink all the water in Shiprock [5],
he'll sew up that stained pond
with a tooth and his longest hair.
"You'd look to the west-and there would be pink." [6]
Symbol: U
Atomic Number: 92

And the mouth opens in the seeding, deciduous trees.

Shinkolobwe [7]: a wound is a doorway, this is a portal.
The old moon sleeps in the new moon's arms.
Bateke, auric in the trees, weebling through darkness
Blue like Gauls [8], but shining in the blackness,
There are no alchemists, only opportunists
And beneath them the debased cogs
Who bear wheelbarrows, packed full of lightning.
"Why a corpse as me would be afraid
of radiations of uranium? Misery already killed us." [9]
Symbol: Ra
Atomic Number: 88

And the trees failing in the beautiful, deciduous light

O Doctor Roentgen [10], thank you for this armature.
O Doctor Bequerel [11], thank you for this radiant salt.
O Pitchblende [12] and Bismuth [13], here we go—
piles of rock squeezed to one glowing seed,
A złoty [14] dusted in radium, a death confection,
Her black hats
Trussed up with astral flowers,
The beaker that started all of this,
Glowing on the white table.
Symbol: Po
Atomic Number: 84

And the snake continues to bite
Until it is only appetite
In the midst of the beautiful trees.

And the oldest trees open their appetites
In the light that does not fail.

and nausea burns in the grandparent trees
In the midst of the beautiful, absent appetites.

The black dog becomes black spots
Borne on the wind; and the name of
The star is wormwood. [19]
Radiophobia [20], timed like a waltz
And all these hailstones, glowing
scorpions inside—black ice and
leave the house, leave it unlocked,
unusually deep pits,
tiny dangerous bodies and coffins
“These glasses no longer deceive us!
These glasses show us more clearly—” [21]
Symbol: Pu
Atomic Number: 94

And together we are the perfect day,
And among us dwells the light which does not fail.

There are no beasts on Beast Island,
Only the dear chime of Greenwich mean time.
Atmospheric—Plumbob, Buster-Jangle, Hardtack, Dominic [22]
And lambing sheds [23]
The shade of the Atomic Cowboy [24] yodels
"hoo hoo, damn good place to dump razor blades." [25]
Uranium-bearing grapeshot, cobalt and copper
grapeshot carted in wheelbarrows,
and the blue-white asterisks --
"A is for Atom, B is for Bomb.
C is for Cancer, D is for Death" [26]
Symbol: Uuu
Atomic Number: 111

Tell me: what is the power that will wash an entire generation?

Chart yourself south for the perfect day,
And the light that dwells among us
That does not fail.


**
Footnotes, prepared by Stefene Russell
[1] Thanks to Chris Phillips for the title, which comes from his dream, wherein I was leaving for Four Corners and advised him to go south for the animal index. (Annotations by the poet.)

[2] From The Nag Hammadi Library, The Interpretation of Knowledge, Translated by John D. Turner. The Nag Hammadi, also referred to as “The Gnostic Gospels,” is a series of early Christian scriptural texts accidentally unearthed in the Egyptian desert in the winter of 1945. Among the scrolls was the Gospel of Thomas. Novelist Philip K. Dick thought of these scrolls as examples of “living plasmate,” or intelligent information that willed itself to surface when the need for it was greatest – that is, just after the detonation of the atomic bomb earlier that year.

[3] The Nag Hammadi Library, On the Origin of the World (“The Untitled Text”), translated by Hans-Gebhard Bethge and Bentley Layton.

[4] The Navajo word for uranium, which translates literally to “yellow-brown” or “yellow-brown earth.” The Navajos refer to the mineral itself as “the yellow monster.” In Navajo culture, a monster is thought of not in Hollywood terms (merely evil) but rather as a force that gets in the way of a successful life, or upsets the greater balance.

[5] Though Shiprock is plenty radioactive, this should probably actually be Church Rock. “The biggest expulsion of radioactive material in the United States occurred July 16, 1979, at 5 a.m. on the Navajo Nation, less than 12 hours after President Carter had proposed plans to use more nuclear power and fossil fuels. On that morning, more than 1,100 tons of uranium mining wastes – tailings – gushed through a packed-mud dam near Church Rock, N.M. With the tailings, 100 million gallons of radioactive water gushed through the dam before the crack was repaired.” “The High Cost of Uranium in Navajoland,” Bruce E. Johansen, Akwesasne Notes New Series, Spring 1997,Volume 2 #2, pp. 10-12. Navajo comic artist Vincent Craig based his superhero “Mutton Man” around the Church Rock disaster; like many of Stan Lee’s heroes, Mutton Man attained his powers after exposure to radioactivity, in this case eating contaminated mutton.

[7] Uranium mine, located in Congo’s Katanga Province, which supplied the uranium ore for the Manhattan Project.

[8] Celtic French tribe, whose warriors prepared for battle by painting their bodies blue and greasing their hair into spikes with animal fat.

[10] German physicist Wilhelm Conrad Röntgen, who discovered X-rays in 1901; he is the namesake of the element Roentgenium, formerly Unununium.

[11] Antoine Henri Becquerel, French physicist who, while further investigating Röntgen’s discoveries, accidentally discovered the property of radioactivity while experimenting with phosphorescent uranium salts. A bequerel (Bq), named for Dr. Bequerel, is also a unit of measurement for radioactive decay.

[12] A major uranium ore. Marie and Pierre Curie refined in their laboratory, eventually extracting radioactive polonium. The primary European source was in Bohemia; pitchblende miners routinely developed what was called “mountain disease”; we know it as lung cancer.

[13] Marie and Pierre Curie noted that this radioactive element signaled the presence of polonium in a batch of pitchblende ore.

[15] Astrological influences in play at the time of the Trinity test.

[16] “They’ve tried every shot they can think of, over and over and over and over. Rabbits would run across there, and they would be on fire.” Ken Case, “The Atomic Cowboy,” January 1984, p. 3, Gallagher, American Ground Zero: The Secret Nuclear War.

[18] Tatsuichiro Akizuki’s description of the Hiroshima blast from his book, Concentric Circles of Death, used as epigram in Galway Kinell’s atomic poem, “The Fundamental Project of Technology.”

[19] Revelations 8:11, KJV; “And the name of the star is called Wormwood: and the third part of the waters became wormwood; and many men died of the waters, because they were made bitter.” The Ukranian word “Chernobyl” translates to “bitter grass” or “wormwood” (Artemisia absinthium). Interesting to note that much of the vegetation at the Nevada Test Site – common sagebrush – is classified as Artemisia tridentata.

[20] “Radiophobia” is a work by Ukranian poet Liubov Sirota, from her book Chernobyl Poems. It refers to Russian officials claiming that those around Chernobyl became sick due to their fear of radiation, rather than exposure itself, a PR approach familiar to those who lived near the Nevada Test Site and were told by the Department of Energy: “There is no danger.”

[22] Tests conducted at the Nevada Proving Grounds in Mercury, Nevada.

[23] Sheep ranchers around the Test Site often observed large numbers of stillborn lambs, many with severe birth defects, after ewes were exposed to fallout.

[24] Reference to Ken Case, who worked for the AEC during the 1950s; he is on the cover of American Ground Zero and his interview starts the book. His job was to ride into Ground Zero with a herd of cattle and horses so that government scientists could measure the effects of radiation on animals. When Gallagher interviewed him in the mid-‘80s, he had contracted cancer in nearly all of his organs and had had “several feet of his intestines removed.” His wife, Woody, was also dying of cancer. The Cases passed away a year and a half after their interview with Gallagher.

[25] “…I came across a phrase publication from the 1950s called Armed Forces Talk. Used to instruct soldiers before they would attempt their atomic maneuvers at the Test Site, the magazine described this part of the west as ‘a damn good place to dump razor blades.’” Gallagher, American Ground Zero: The Secret Nuclear War, p. xxiv.

[26] J. Preston Truman, November 1987, Salt Lake City, Utah, p. 299, American Ground Zero. This is the J. in the dedication to the poem; this quote is in reference to AEC propaganda: “I remember in school they showed us a film once called A is for Atom, B is for Bomb. I think most of us who grew up in that period, we’ve all in our minds added C is for Cancer, D is for Death. In my own life I try not to think about the future in a sense because I don’t know that the future is even there. The realization comes that you don’t really have a future.” Truman was part of a first generation of anti-nuclear activists. He is the head of Downwinders (downwinders.org), a nuclear watchdog organization founded in 1978.
Posted by Poetry Scores at 3:19 PM

this cd is a killer and needs to be in print again, and sent places.

thanks - working on it!